Written by Luuk Hartsema on 4th May 2021

This is the third and final article in a series of three about how we practised with Lean principles. We established in our first article that we needed to find a form or shape in which we became able to address tensions that concern a chain of roles and circles. In our second article we dived into the need for prioritizing and aligning our efforts towards company goals by using the Policy-X Matrix. In this third article we put theory into practice.

Bouke van Zinderen, Lean thinking expert, was temporarily embedded in our organization. Using the observations Bouke shared, we started conversations throughout the organization to increase awareness about potential for improvement. Colleagues were often unaware that they could contribute to solutions for tensions other roles were struggling with to resolve.

The Double Diamond framework (Nessler 2018) is my personal favorite because it is the most detailed process model. But one should keep in mind to keep it simple. After all, these processes are there to give structure and keep everyone on the same page. You don’t want to exhaust colleagues with intricate complexities.

Make the process work for you

We made that mistake of giving lengthy explanations ourselves while we were introducing the Kaizen circle and learned quickly that it’s best to apply the process and let the team gain experience by putting the Kaizen circle into practice instead. Having a process and understanding it is important for teams. We’re a quirky organization that likes to adjust processes to our needs as we see fit anyway.

Often when processes do not immediately work the way you’d like them to, people tend to just stop the process altogether. It’s better to make an improvement effort, reap the benefits of what’s already there, and address the specific downsides of something that doesn’t work for you (yet).

Every now and then when Bouke was explaining Lean principles and the Kaizen circle to us, I had this feeling of being slightly annoyed with Lean. I sometimes feel the Lean community utilizes obscure and unique vocabulary while common language is available. That vocabulary makes it sound more complex and pretentious than needed. Don’t let that put you off, the bottom line is that Lean teaches methods that can get you to continuously improve. And getting 1% better each day is something that we care about.

The Kaizen process model has six stages to go through (Define, Measure, Analyze, Generate, Implement, Control). Although there are no rules set in stone, running through the process should go in a quick repetitive rhythm.

The Kaizen circle builds on the same paradigms as for example the “Build, Measure, Learn” cycle from the Lean Startup Model. It encourages people to learn fast and adjust quickly. Quick and small iterations enable fast learnings. It takes time and practice to get into that rhythm. It’s relatively easy to increase the size and complexity of a problem. It’s much harder to narrow it down to small manageable chunks. 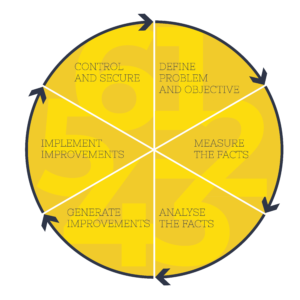 This  short video (90 seconds only) is a great way to explain the six stages of Kaizen.

When teams have the feeling that not all potential is utilized or that they work very hard but aren’t seeing results, doing a waste walk helps to explore improvement potential. This is a good starting point for a Kaizen improvement process.

Anything that doesn’t add value is considered waste. Taiichi Ohno, founder of the Toyota Production System, identified seven types of waste. In the context of software development, another type was added which resulted in the following acronym; DOWNTIME. Each letter represents a type of waste:

Overproduction: make too much or too early

Non-Value Processing: work that generates little to no value

Transport: handovers between roles or teams

These categorizations are there to give directions into typical areas for improvement potential. They support the creative process needed to enable teams to discover waste.

Finding waste is all about solving problems

Before you can fix a problem, you must see it first. However, the longer you’re in the same place, the more difficult it is to see the waste around you. During a waste walk the team comes together to make a joint exploration and search for waste within the current projects and overall in their work. Such an exploration makes waste visible again.

After multiple Waste Walks, teams within Spindle started several Kaizen improvement processes to improve their performance. One of the topics that sparked interest was the amount of issues deployed to our production environment that needed a hotfix. Every time an issue is deployed to production, our customers could potentially experience complications with our services. In the first half year of 2020, a total of 48 hotfixes had to be made by the Webapp team. This translated to an issue needing to be resolved every four days (which requires additional deployments, testing, and time).

The combination of being accustomed to situations / working around the problems / reluctance to address the issues is quite a showstopper while trying to improve.

By applying Lean to look at the problems with a more holistic approach, many conversations, and going through a root cause analysis, colleagues realized that they had opportunities to bring about improvement. It became clear that the initial expectations for the blackbox tester were unrealistic and better collaboration and improvement was needed.

We also took this opportunity to give considerable thought to which roles are involved in the whole quality assurance process and who should participate in an attempt at improvement.

A closer look at the overall process

During the “measure the facts” stage of the Kaizen, the team decided to take a closer look at the overall process that was followed. A  SIPOC diagram was used as a way to answer important questions such as:

Asking and answering these questions encouraged team members to cooperate and communicate. This drastically improved our understanding of expectations and goals; what is the internal customer (e.g. colleague) expecting and what does the supplier hand over? Instead of trying to improve an individual circle, the team started to improve an overarching process involving a chain of circles and roles.

The quality assurance process was radically revised (a so-called Kaikaku) as a result of the quality assurance Kaizen. A new circle was created, the capacity for testing was increased, the team started to measure the facts, and tracked the amount of hotfixes. The Spindle Webapp team started to track the amount of hotfixes as well, measured the severity of each hotfix, and analysed the root cause.

Often this led to conclusions such as “Missed during development” or “Missed during QA (staging)”. In the latter case, the team also started to ask: Could the blackbox tester have picked this up or not? This led to the conclusion; we (Webapp devs) need to test more often and more thoroughly ourselves!

As a result of the improvements and the increased awareness, we have seen a significant decrease in hotfixes. In the second half of 2020, the webapp team had to do 16 hotfixes. This is an improvement of 66% compared to the first half of 2020. The result was:

The enthusiasm of the Webapp team caught on and while the team was making these improvements, other teams also started to experiment with Kaizens and waste walks.

Every marriage has its struggles

In our first article, we used the metaphor of a happy marriage between Holacracy and Lean. One must admit that even in the best marriages struggles occur. Bouke really helped us to get started on our continuous improvement journey and together we discovered how Lean methodologies could enhance our Holacracy practices. We’re still learning every day and would like to thank Bouke for getting us on the right track.

A continuous effort to make it work is required. Success never presents itself in a linear motion and does not come effortless. We should continue to make waste visible and bring about these improvements. Being open to identify improvement potential as a team and implementing improvements in a structured way is something that has strengthened our processes, as well as our team. We hope that our journey has given you ideas on how to strengthen the process of your team.