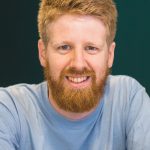 After the first masterclass of the Holodeck 101 event, it was time for me to take the stage and share our knowledge about GitOps. For all developers to be able to work with the Holodeck platform, we – the infra team – set up a template to make it easy for developers to create and deploy a new service by themselves without the interference of infra. In this article I’ll explain how we did this and were able to hide the complexity of Kubernetes for developers.

The benefits of infrastructure as code

Why would you go through all this trouble to set up your infrastructure? Because infrastructure as code has a large number of benefits:

Storing the code in a Git repository

What we mean with GitOps

In Holodeck we use the word GitOps not just to describe the workflow, as is described above, we use it to describe the entire Holodeck platform. The Holodeck platform is a platform-as-a-service (PaaS) built for developers-without-infrastructure/operations-knowledge in mind. We wanted to build a platform with modern technologies, without imposing the burden of learning all of these technologies on the users of the platform. We did this by not only leveraging GitOps for the infrastructure itself, but also for the services deployed on the platform.

One of the goals of Holodeck as a platform is to enable teams to do their own DevOps. Creating and deploying a new service on Holodeck requires little knowledge of the underlying technologies and — this is also important — requires zero interaction with the infra team. Other aspects of DevOps like monitoring, alerting, dashboarding, log inspection and more, are all automatically configured by the GitOps workflow, developers can access the tooling themselves. This empowers teams to own their service, from development to deployment to maintenance. It also reduces the workload on the infra team and partially removes them as a bottleneck, so development is not slowed down.

Overview of the Holodeck platform

The following picture gives a high level overview of the Holodeck platform: 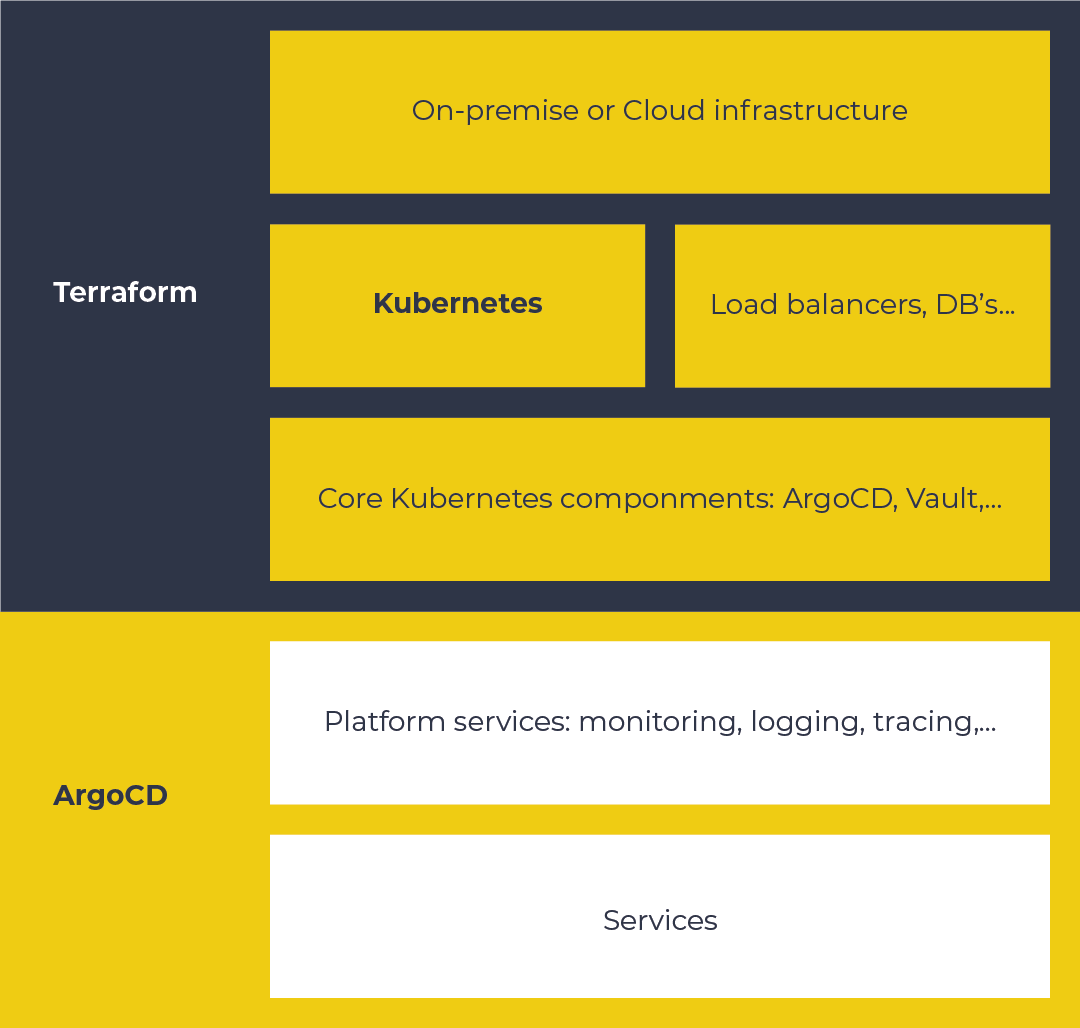 The current platform is built on the AWS cloud. We tried to build the platform as cloud agnostic as possible, so we have the flexibility to switch to another cloud or even move the platform on-premise (which is eventually our goal).

Kubernetes is running on top of the cloud, or on-premise infrastructure. For now we are using AWS EKS. Besides Kubernetes, there are the necessary network components (load balancers) and optional databases that are not hosted on Kubernetes.

ArgoCD and Vault are provisioned on top of Kubernetes, and together with some plumbing (Ingress-NGINX, cert-manager, etc.), this forms the base platform. Terraform is used to provision and maintain the base, it can provision the infrastructure from scratch (except for a few manual actions, related to secrets and DNS). This allows us to quickly scale out to other regions, or in disaster scenarios, ditch and rebuild the entire infrastructure.

ArgoCD — provisioned in the base layer — can now take over from Terraform in provisioning further platform services. A bit further on, I’ll explain what ArgoCD is, for now think of it as Terraform on Kubernetes.

In this layer, all additional platform services — which are not needed in bootstrapping — are provisioned. This includes, but is not limited to:

For these services, provisioning with ArgoCD is preferred over Terraform for multiple reasons:

Kubernetes was built with a simple idea: you tell it what resources you want defined in YAML files, and Kubernetes will make sure the resources are actually there and stay there. A resource can be anything. Kubernetes is mainly built around container orchestration, thus the main resources are things in and around containers. However, Kubernetes is not limited to these resources. By defining Custom Resource Definitions (CRD’s) and deploying controllers, Kubernetes can be extended with almost any resource. Although the idea is simple, building things in Kubernetes can be complex. This is because you need domain knowledge to write the resources. And to make matters worse, the domain can be extended by CRD’s. We don’t want to impose this burden on developers.

Kubectl is the new ssh. Limit access and only use it for deployments when better tooling is not available. — Kelsey Hightower

Helm is a useful abstraction over Kubernetes YAML’s to make it modular and more DRY. The problem does however remain that you still need domain knowledge of Kubernetes resources. Helm code can also be really tricky to get right: making errors in YAML extended with Go templating is all too easy.

The solution we developed for this problem is: a holodeck-service Helm template (chart).

A Helm template for developers

All services developed on Holodeck use the holodeck-service Helm template. The template enables developers to set configuration variables (via environment variables), load in secrets (from Vault), request a database instance (via Crossplane), and much more. The only thing developers need to know are the available parameters in the Helm template. The template generates the necessary Kubernetes YAML for the service. Kubernetes complexity is hidden from the developer by the abstraction. Our infra team has knowledge of Kubernetes and various other infrastructure components. With this knowledge, they maintain and add features to the Helm template, making features available to developers via parameters.

ArgoCD as the solution

Services can be deployed to Kubernetes with Helm. Specifically, we could call helm upgrade from the GitLab CI pipeline to deploy. We encountered a few problems with this approach:

ArgoCD is a great tool that helped solve some of these problems, and more! ArgoCD is “Declarative GitOps for Kubernetes”. It monitors one or more Git repositories. On each commit, it will update resources in Kubernetes (via Helm or native YAML’s).

We set up ArgoCD to monitor a “single source of truth” repository, called services-root. The repository contains a JSON file per service, per environment. The JSON describes which git commit (and Docker image tag) of the service repository should be live in the environment. For example:

Ease in using the platform

We focused on making the platform easy to use for developers. Hiding the complexity of Kubernetes and a whole bunch of other tools needed to build a solid PaaS. During the masterclass I did a demo showing the steps a developer would need to take to create and deploy a new service. These steps are:

Looking at the steps, I think we succeeded in our goal of enabling developers to use the platform without help from the infra team. What do you think of our solution? Let us know in the comments below!