Getting started with Holacracy

When I started working at Devhouse Spindle I was asked if I had any experience with Holacracy. I said, “Nop, I don’t”. Of course, I had been reading some blog posts about this form of ‘non-management’ and read stories and experiences from people using Holacracy in the company they work at, but working in a company that actually uses this self-regulating way of managing, no.

The principles of Holacracy

If you read about Holacracy it sounds fairly simple: no layers of management, own responsibilities and self-driving teams. As of most things new, learning to work in a company that uses Holacracy also takes some getting used to. This post is about a couple of things that I noticed and experienced in the first four months working with Holacracy at Spindle.

Sidenote: This post doesn’t explain Holacracy as is. If you’re interested in learning about it, or how it can help your company, the website holacracy.org does a pretty good job explaining it, as well as this 4 minutes Holacracy recap by Brian Robertson.

The first thing I noticed was that every person has one or more roles that come with a couple of accountabilities. This is a good thing, because if somebody doesn’t have a certain accountability, he can basically say: “Sorry, that’s not my responsibility”. Having accountabilities and responsibilities obviously isn’t something new, only Holacracy uses a good way to document this, defining certain roles for specific tasks on which you can fall back to if you have questions about a certain field during your day-time job.

Another thing that felt a bit strange in the beginning were the weekly planned meetings. The previous companies I worked at were all fairly small, resulting in quick communication and decision-making. When there are 35 people on the work floor that all have a say in something, it’s easier to have planned meetings where you can tell others about what’s keeping you busy.

At first, these planned meetings look a bit overkill, especially if you’re used to long indecisive and tiring meetings. With Holacracy, it’s quite the contrary: the meetings in Holacracy are specifically designed for efficiency. To be able to do such an efficient meeting, there’s a ringleader (facilitator) keeping everything in line. 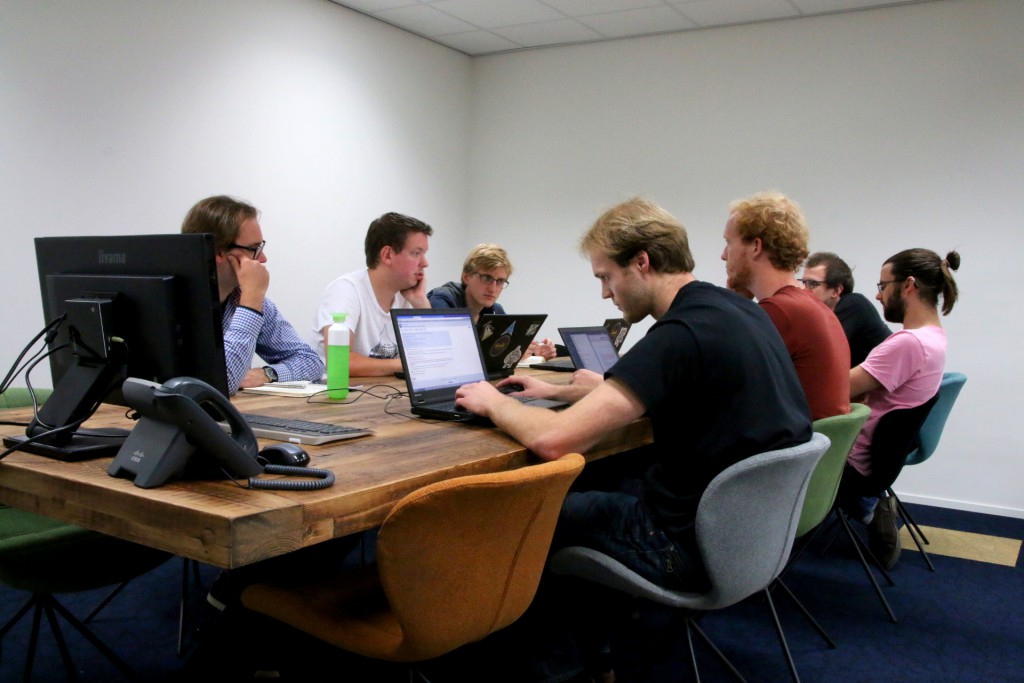 Tactical meeting from one of the Spindle circles

I’m sure in the first few months these meetings looked overkill to me because of the fact that I was new and had a bit less to bring into than someone that’s used to working at Spindle already. After a while when I started to feel at home here, I started noticing how valuable these meetings are. They don’t feel like a waste of time either, because they’re very efficient, even with a big group, coming down to discussing relevant tensions and work in a very effective fashion with little room for squabbling and bickering.

As said before, everybody in the company has a role (or multiple roles) that defines the work they do. It’s perfectly fine to have multiple roles if you enjoy that, and because most of your work probably can’t be defined in a single role most people working in a Holacracy company tend to have more than one. To be officially part of a circle, you’re supposed to have a role in that circle. If you feel like you can contribute (or you’re already contributing), you can propose a new role or ask for an already existing role. These propositions are being discussed in a meeting called a Governance meeting. How many times you do these meetings is up to you, we usually do them every two weeks.

I talked a bit about Holacracy in general and my experience working with Holacracy in the first couple of months. What I like especially is the form of freedom it creates whilst being regulated with efficiently planned meetings. You don’t have to live up to the expectations of 5 managers, which on their own have to live up to the expectations of their 5 managers. You’re basically your own boss. You’re probably thinking about how people get fired and all. That’s basically a bit of a grey area. The holacracy.org documentation states:

“Consider Holacracy the “operating system” for an organization — the core rules that regulate how power is distributed, and the decision making processes for changing that power structure. How compensations work, how to hire and fire, how to do budgeting, etc. are all “apps” that run on top of that operating system.” — holacracy.org

What it comes down to is that you have to implement your own way of hiring and firing people on top of Holacracy. At Spindle we do this by assessing ourselves, as well as collecting feedback from colleagues and discussing the final output in a private conversation with two colleagues.

All in all it felt fairly natural rolling into the Holacracy world. The planned meetings feel really efficient and useful and with everybody being their own manager it really stimulates the entrepreneurial mind of everybody. In the end, this leads to much more innovation and efficient working, because people execute the work they’re expected to do in a certain role. If they dislike the accountabilities and work that comes with a role, they can ‘give back’ the role to the lead link. This way, everybody’s doing exactly what they like and what fits them best.