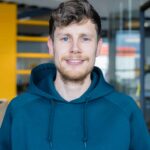 Icons are everywhere. Whether it’s the icon of an app, notification or menu-buttons; icons are considered the ultimate replacement of text. There is still a lot of discussion going on whether this is a good thing or not, and some icons can also be quite ambiguous, which is the reason why text is still important to a smaller extent.

Let me first give you a short introduction to where the current icons originated from. When we switched over from a text-based environment to a graphical user interface (GUI) in late eighties, graphic icons were needed. Especially for the less tech-savvy users; introducing images as icons was part of a big skeuomorphic movement, where ‘real’ items were turned into graphic images to make things easier understandable (and of course, a way to use the newly introduced mouse). Instead of typing “del c:/windows/users/documents/icons.doc” you were now able to delete a file by dragging a document icon (with the name of the file underneath) onto an icon representing a trash can. It made more sense for regular consumers (besides not having to remember all the commands anymore) and was a huge step in making personal computing more accessible.

Jump forward to 2015, where images and icons are all around you and on your screens. If you take a glance at the main activities of Generation Z (born after 1994), you would see that they have a smartphone or tablet in their hands all the time. They were born and raised with interactive screens and internet. Nowadays they’re the ones educating their teachers, (grand)parents and other adults on how to use these former ‘adult’ technologies. Besides that, they take pictures or videos with Snapchat, talk on Whatsapp or create their perfect Instagram moment. If you take a closer look, you’ll notice that the majority of this generation Z is communicating with images or short video clips. Snapchat, Instagram or Vine: barely any text is involved. Even when they add a comment, it’s more likely that they’ll unleash some Emoji-smileys or symbols than a wall of text.

As you can see, this generation prefers communicating and consuming information by looking at things rather than reading – why would you use text, if you could also communicate by using beautiful pictures, videos or images?

This is where the importance of icons comes in. On those rather small screens you have less space in your interface to communicate with your users or to point them in the right direction. They don’t want to read what to do, they want to recognize icons and find out on their own. To decrease ambiguity, an icon should be stripped of any flashy and gimmicky 3D-effects. It’s all about fast recognition, efficiency – flat design comes to mind – and communicating the right message. If you leave out text-labels in your menu or notifications/status, there’s more space available for your content and makes it stand out more.

However, creating a new perfect icon and communicating the right message to every user is quite difficult. Especially considering there isn’t a real world-wide standard when it comes to icons. Let’s take the ‘hamburger’ icon (three listed stripes) as an example. It is supposed to symbolise a menu and is gaining popularity. Because this icon has been adopted by ‘big guys’ such as Google and Facebook, more and more people are getting familiar with the icon, it’s meaning and use. It’s one of the few icons that don’t resemble any ‘real’ things but work thanks to recognition. That being said, best practice on a regular computer screen thanks to it’s size still is the combination of icon and text: a recognizable icon and text-label underneath it.

Icons are here to stay and with Generation Z dominating the wonderful online world even more in the future, the ‘big guys’ bringing consistency in icon-usage, we will hopefully develop a sort of universal icon language. Let me conclude this article by a famous English saying: “A picture is worth a thousand words”.