Organizing a month-long online event focused on product development: how we made it work for our company 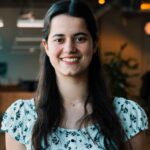 Can you imagine clearing your entire schedule for a month to work on new challenges and product development together with your colleagues? Well, that’s what we did during our company-wide event called Holodeck 101. During this event we tested new techniques for our future products that were gathered under the working title “Holodeck”. In this article we’ll share the insights of organizing this month-long event and the lessons learned by the organizing team.

Turn of events – from an offline to an online event!

To organize everything for Holodeck 101, a special team was formed, and it took approximately four months to plan the month-long offline event. The todo list of the organizing team consisted of a myriad of different things, such as brainstorming with other colleagues, formulating challenges to work on and working out the practicalities of the event.

However, with new corona measures coming around the corner around mid-November, the organizers hit a wall and had to decide on whether to continue the event online or to postpone it. With many hoping that the event would be offline, after being exhausted by online meetings and events for the past two years, postponing was becoming more and more likely and desired.

Because of the nature of the event (product development) and the uncertainty of when an offline event would be possible, the choice was finally made to go for an online variant. Although the team had only two months left to shift the event from offline to online, they managed to pull it off. One of the organizers, Luuk Hartsema, mentioned this challenging last minute decision in one of the podcasts recorded at the beginning of the event, however, he also expressed that it paid off.

“Even if you don’t feel prepared for what is about to happen, you have the ability to deal with the situation and also trust that it will work out eventually” – Luuk Hartsema 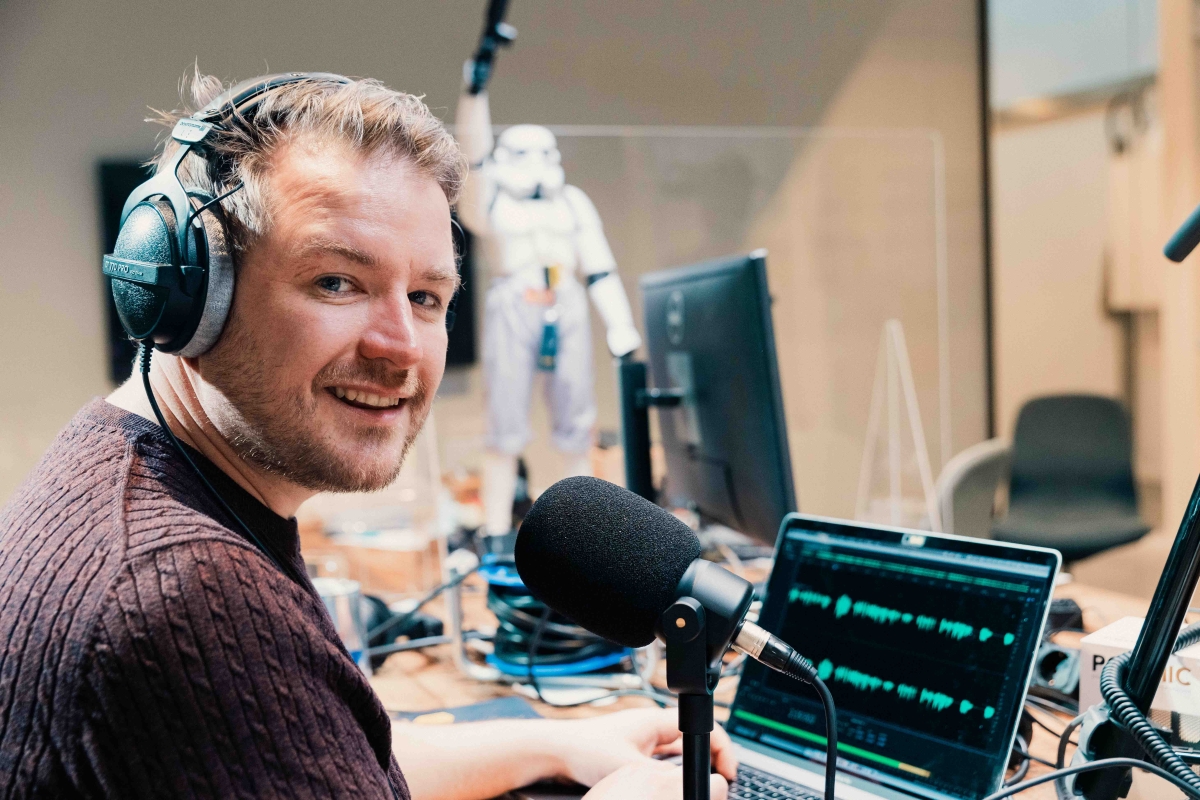 Trying other forms of communication

The event was shifted to online tools and apps within a matter of weeks and was ready to start at the beginning of January. Next to our regular communication tools like Slack, we used podcast recordings to share information about the event and Holodeck itself. This way participants weren’t bound to their desks, but could go outside and take a walk while listening. The podcasts worked extremely well and have led to many enthusiastic reactions. This enthusiasm also definitely supported goals of having fun and learning more about Holodeck throughout the event. 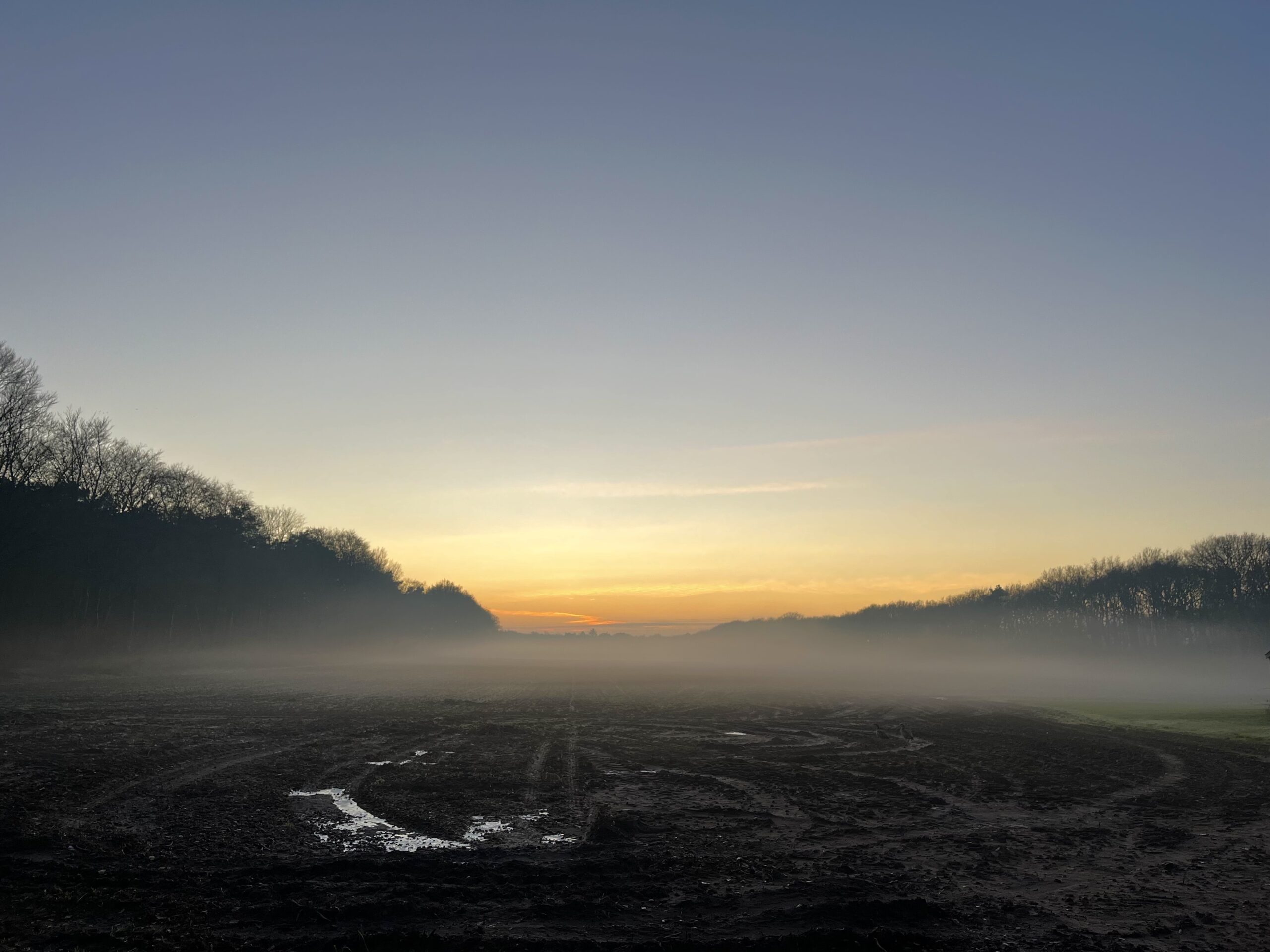 When the event was moved to an online environment, it quickly became apparent that a different approach was necessary to organize the event than the original offline plan. To be fully present, engaged and enthusiastic online for a long time is challenging. The organizing team sat down and brainstormed about this until they had concrete solutions, and decided that the event would need to be an uber relaxing experience. They encouraged participants to plan relaxing work days, go on hikes and walks while listening to recorded podcasts about the event. They also created a shared Spotify playlist that participants could contribute to and had shared online yoga sessions together for relaxation after the workday. Alongside this, watching YouTube videos, reading books and other things were also encouraged to clear the mind and stay productive.

Goodie boxes were another incentive that sparked enthusiasm and excitement for the teams. These boxes were delivered to participants once a week and contained delicious snacks, coffee, tea, socks, meals, a program booklet and practical information booklets for during the event. A few lunches and dinner meals were also sent to participants so that they weren’t distracted by grocery lists and to help them focus more on their challenges. 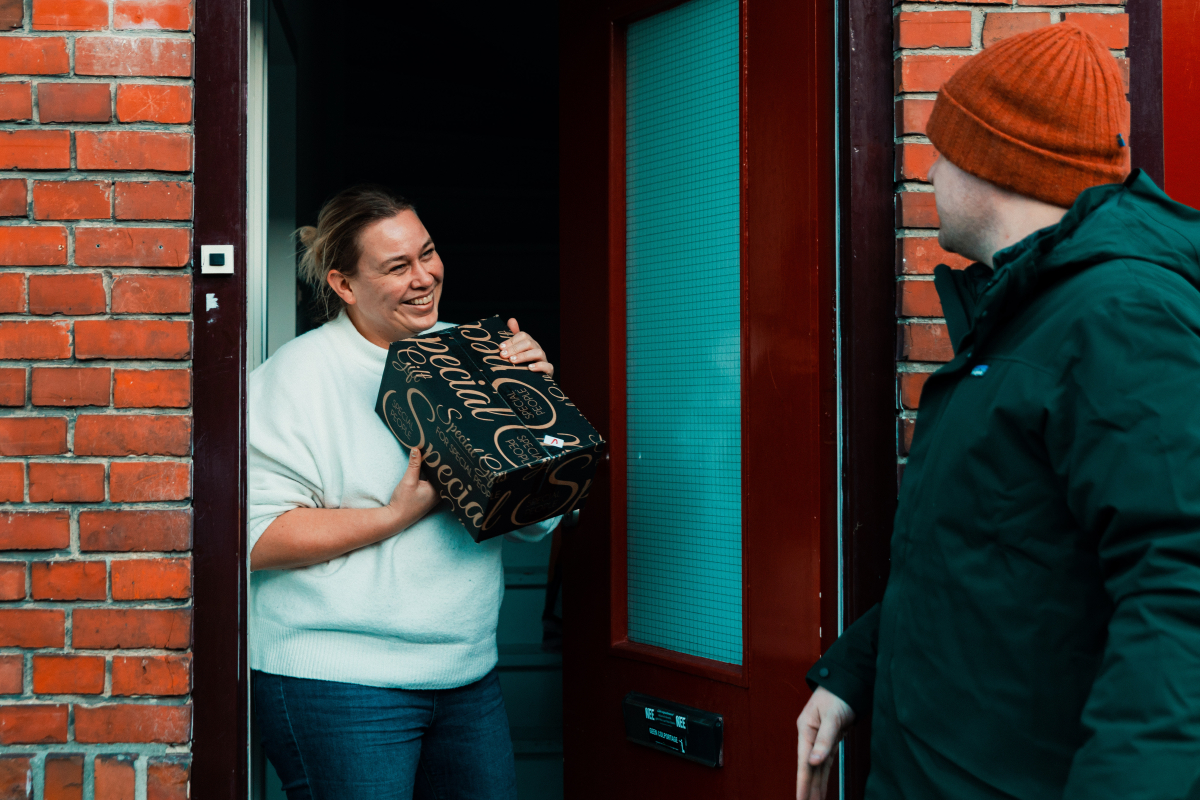 Planning the event week by week

The event was planned to last four weeks and the team created the following plan:

What worked super well during the event was that we started off with a fun initiative. The organizing team had a fun initiative to ask teams for a logo, team name and what their (fictitious) ideal work location would be. Eventually these were all put together into a fun postcard that they received in their last goodie box. Participants also wrote a card to ‘their future selves’ at the end of the event, which they will receive again a year after the event.

Another way to make the event work online, was by organizing half-way demos. Demonstration presentations of challenge progress were not initially planned, but they were effective for the participants and the progress of the event. These were organized with the purpose of exchanging feedback, with the teams being put into two team groups that presented their product demo to each other. It was an efficient way to test whether shorter development cycles would work, and these half-way demos eventually led to better solutions and discussions. It was effective for participants because they had the opportunity to clarify what they still needed to work on and they used the demos to get their thoughts in order. These half-way demos were also a powerful way to connect the teams and create clarity for those who desired it. 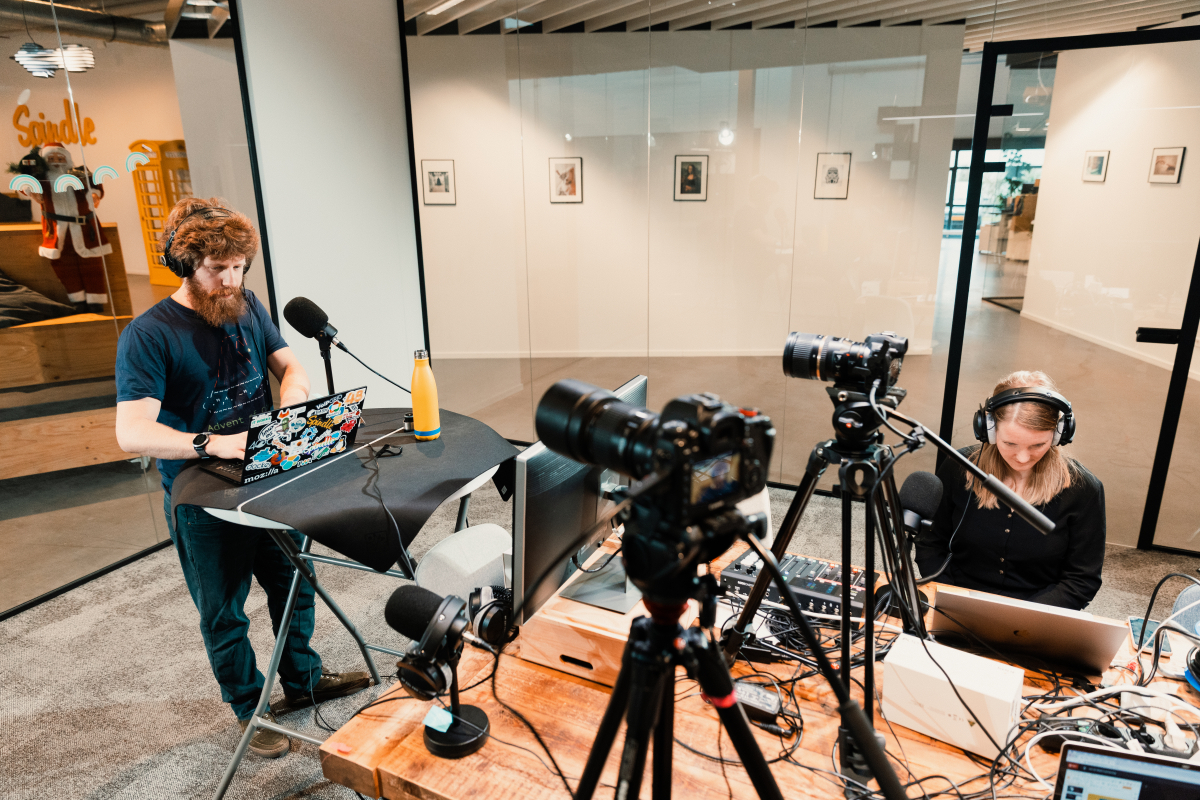 Clearing our schedules for a month

One of the biggest challenges faced during the planning of Holodeck 101 was the prospect of clearing our schedules for a month! It was scary to even consider at first, since our services and platform had to perform as usual, but everyone was given the chance to put their work aside that month as much as possible. A few colleagues were not able to participate as their schedules did not allow for a clearing, but most decided to join this unique opportunity. Taking this risk did pay off eventually though, with the event allowing participants to fully dedicate their time to work together on the future of the company. It also made sure that everyone who was part of the event, worked towards the same goals with clearing all calendar distractions. Empty calendars created a more creative environment in which experimentation and all-out development was possible.

So then comes the question, would we recommend this kind of event? And the clearing of the entire company schedule for it?
Our answer is a big fat YES!

Even though everything changed with very short notice organization wise, this event has had a huge impact on how we develop, but also on how people who participated think about the work they do. An example of this is that by being part of different teams than they were used to, participants discovered how decisions or changes they made could also influence other factors in the development process and how everything is linked together. Furthermore, as mentioned above, it also brought together people with different mindsets and jobs within the company. These colleagues had often never worked together before, but worked collectively throughout this event on challenges to make it as efficient and effective as possible on all fronts.

Learnings from an organizational perspective

Just do it! Yes I used the Nike motto here, but that’s because it matches so well with this event. After the experience of Holodeck 101, Luuk discovered the importance of doing rather than just saying, because even if it sounds scary, doing it will pay off in the end. Even if you feel like it’s not possible, there is always a way, which was shown by the switch from an offline to a completely online event done here in only a matter of weeks. Another learning from the event was the importance of stimulating to continue to learn. It demonstrated to all participants how important it is to keep learning as teams developed new skills together and therefore also grew together throughout their work, which will benefit them in the long run as well. 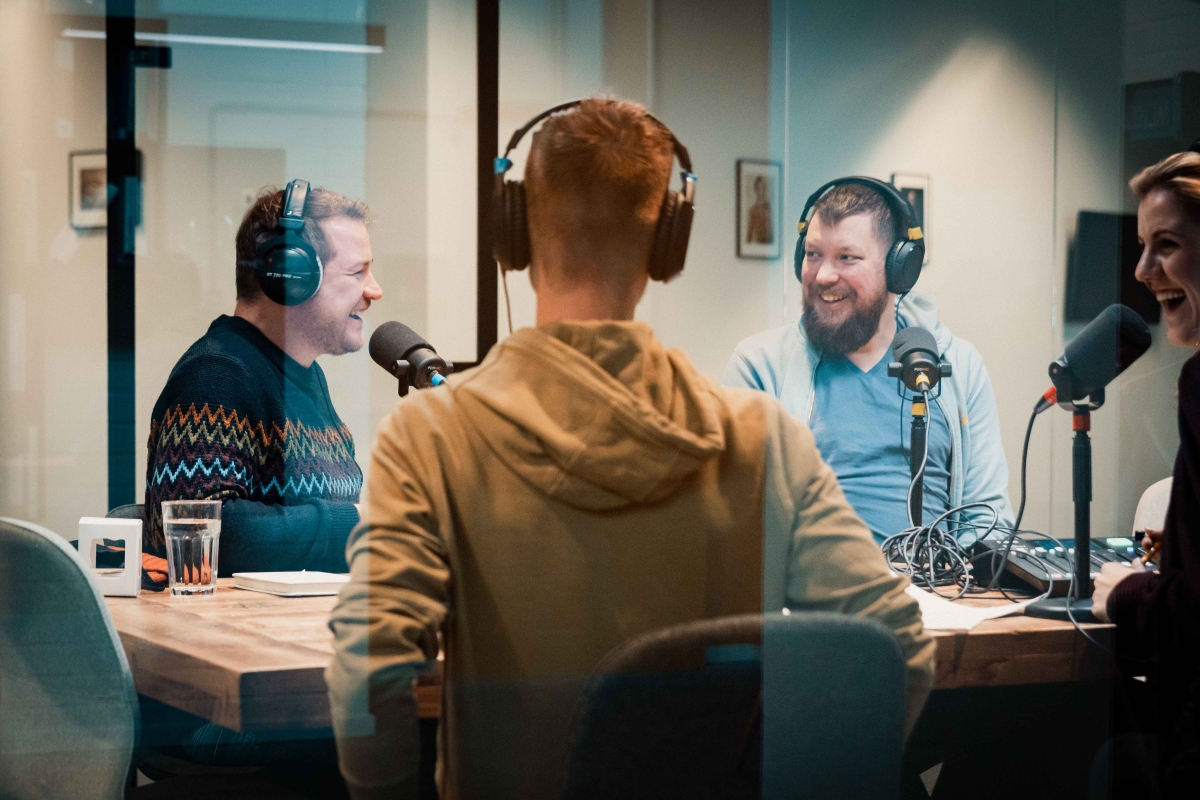 Alongside this, the event also provided the whole company with development innovations within the Holodeck platform and highlighted the importance of communication. Communication was an important learning from this event for team work, but also for progress. This pointed to the importance of letting people voice their concerns and listening to them during the process of Holodeck 101 to let it run as smoothly as possible. For Luuk and co-organizer Sanne, it was also very important to anticipate these concerns and try to solve them before they surfaced.

Everything worked out in the end

When the event shifted from offline to online, the organizing team also shifted the type of event from pressure cooker into a slow cooker event. This meant that as the event was planned very compactly and high-paced offline, it was a lot more relaxed online as these online (meetings) require a lot more energy than offline. This was accomplished with content like podcasts, not a lot of live meetings and recorded info sessions so that colleagues could plan to watch them in their own time. This was especially very convenient with all the distractions that working at home brought with it, from cats walking across keyboards, packages being delivered and children playing in the background or wanting to be part of conversations, that prevented smooth meetings.

The ultimate goal when it was announced as an online event, was to try to recreate the offline energy levels through an online event. This was challenging for sure, but it 100% worked out. We also definitely want to continue to plan events like this! It helped to bring the whole company together, increased the understanding we have for each other, shifted how we work together and listen to each other. It also successfully fused everyone’s creative brain power and goals together for the projects being completed.

Did your company shift to online events during covid times? We’re curious about your experience! Let us know in the comments below.