The Design It; Build It Conference London

Two weeks ago I attended the DIBI (Design It; Build It) conference in London. A one-day event in the beautiful Royal Institution of Great Britain. The day existed of eight talks on various topics. In this blog, I’ll talk you through the ones that I found most interesting. The entire list of speakers can be found on the DIBI website.

Side projects are stupid

The day was kicked off by NY-based designer Tobias van Schneider. His talk was titled “Side projects are stupid”. The talk was very impressive and most of all very enlightening. It was based on five side project principles:

Let yourself be stupid is aimed to not overthink projects from the start. Don’t start a project thinking of the ROI or business model. This’ll grow into the project if it’s valuable.

If you think about these things from the beginning your aim is off. Also, ignore everybody and trust your gut. Your gut feeling is based on earlier experiences and lessons learned and is mostly right for you. Don’t believe people telling you differently, especially in the beginning. If a lot of people do tell you differently, prove them wrong!

A few years ago, people were appraised for being a specialist. A jack of all trades, and probably mediocre in all of them, sucked: we need people who understand a thing or two and understand them well. Tobias states this is wrong. Why can’t you be a jack of all trades and a master of some? Try things, don’t fear. Stay busy, go do stuff! Side projects rock! 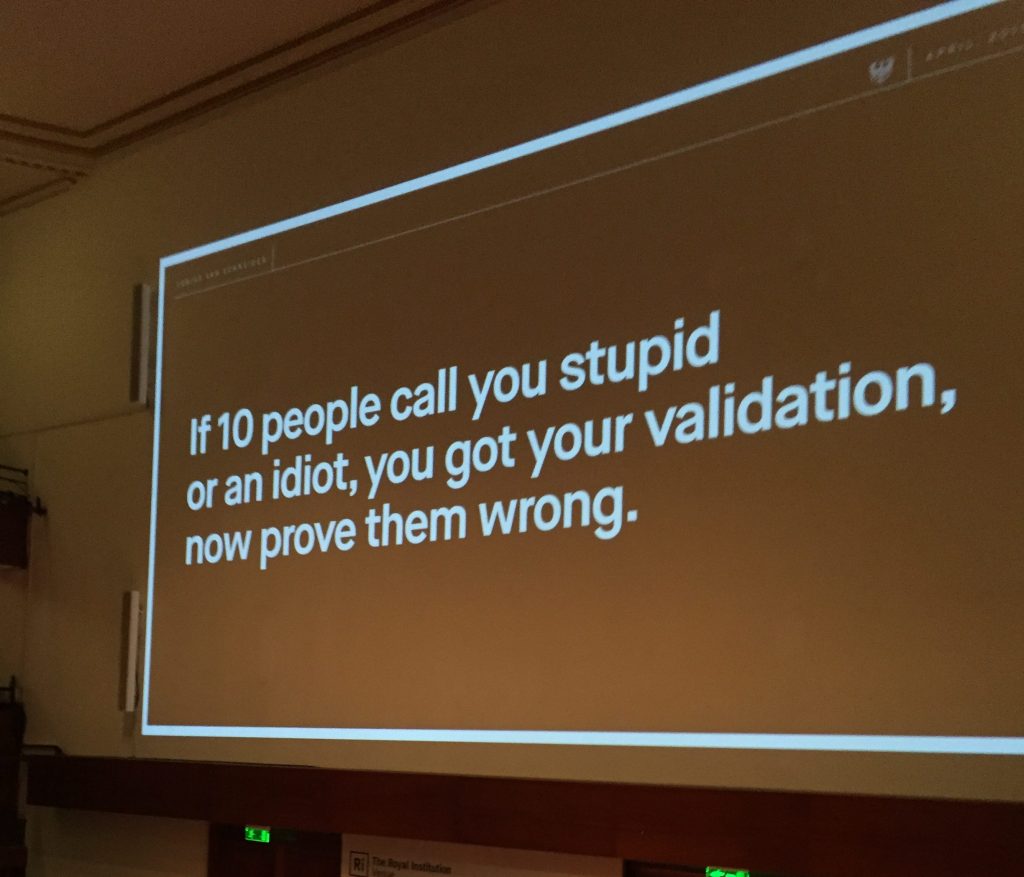 Frances Berriman talked us through the process of changing the face of digital services from the government. I thought this was interesting, as governments and digital products, in my opinion, are mostly known for their ever-failing extremely expensive projects.

The gov.uk website was changed over the last years, from dozens of split websites, different styles, different tones of voice etc. The project team of which Frances was part of, aimed to make the entire website clear, consistent and easy to use for everybody.

For one, she explained they made really fancy icons at first, to clear up various sections of the website. They used these icons to categorize specific parts of the website that had a ‘Question’, ‘Documents’, etc.

When later in the process they asked users if they knew what the icons meant, most of them didn’t. When Frances and her team were figuring out the new layout they couldn’t really find a proper place for the shiny icons and as users stated they didn’t really understand them anyway, they decided to leave them out.

A fun thing I really liked was that they designed and printed stickers for the different teams that worked on the project. These stickers were meant to show certain progress, “Completed milestone”, “Great meeting”, etc. A really fun way to improve moral and keep work fun. Another cool thing she told about were the impromptu ‘Show and Tell’ moments, where people of various teams showed their progress and work. Not in a specially allocated room, but right in the middle of the office, a good way to pull managers and higher staff into these meetings as well. 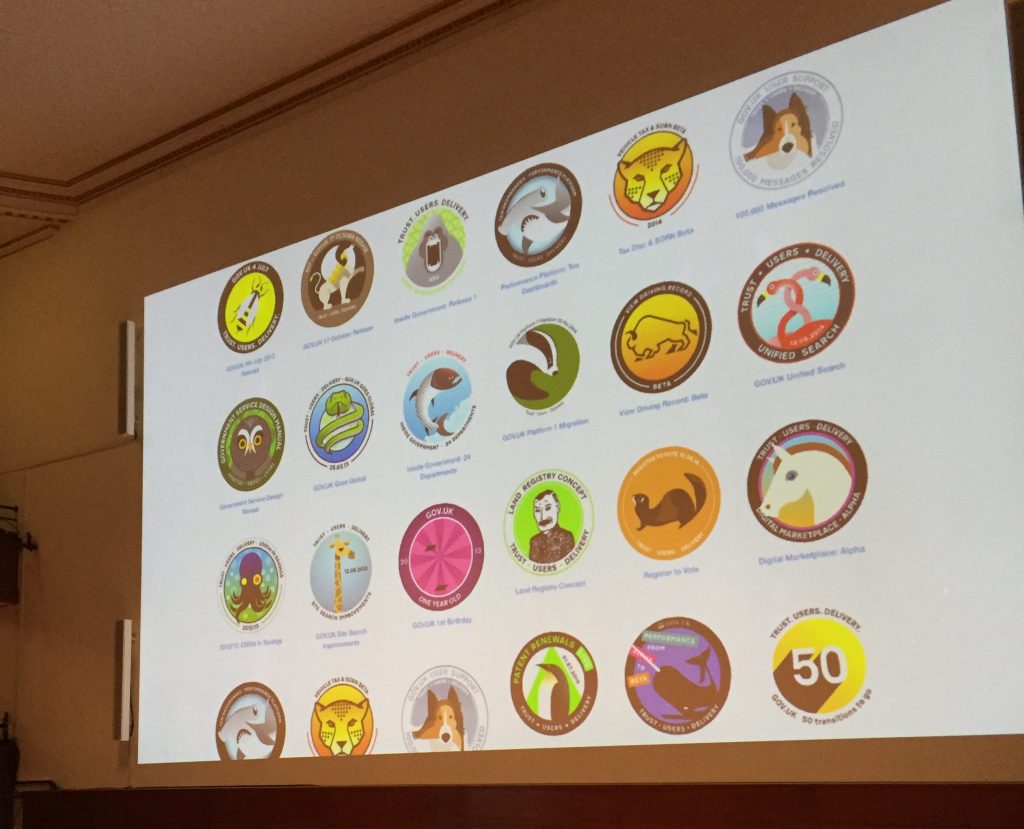 Five things Frances stated as points that worked out well during the process are:

Most of these I already explained above, share UX, show and tell, ask for people’s opinions. Staying honest is also important, don’t compromise. Research is also a team sport, so mixing up the team and let people work on stuff together is good. UX isn’t only how something works, but also if it works all together. Slow pages or stuff not showing is also UX.

In this talk, Jane Austin takes us with her on a manager’s journey. I found this talk very interesting because basically all the things she mentioned as to what makes a good team and manager, are things we at Spindle have already integrated in our Holacracy way of working. Three things that stood out most here are:

I think these are a couple of things that make Holacracy work as well. It was funny to hear the project Jane’s most proud of is the project where she as a manager almost didn’t do anything. This was exactly the reason why Mark, founder of Spindle, decided not to hire any manager at all.

A good way to achieve this is to empower the team and create trust between team members. The three things aforementioned combined, contribute to creating conditions for people to do really good work, which results in happy people and happy productive companies.

The journey from software to hardware

This talk by Peter Parkes from Made by Many interested me because I was curious to see how a software company made a transition into being a hardware company as well. This reminded me of the Jetpack side project we have at Spindle. Made by Many decided to take a try on a physical product, namely a programmable ball for kids aged 6-10. Peter states that ‘Design & Making’ makes up for a better company, so why not try something completely different from what you’re used to.

Something I found interesting was that Peter said that the ordering and shipping process is actually fairly easy (services like Shipwire and already-made solutions make up for these things). Another thing you easily oversee when making an ‘electronic toy’ is that the ball has to be sturdy enough for kids to play with, without damaging the technical parts, yet not sturdy enough to make them bleed. The original prototype didn’t fit this description, so they had to make various designs to tackle the problem. Another difficult thing was the firmware, they struggled with this a fairly long time.

A Kickstarter campaign was used to fund an initial batch of the Hackaball. During the question round, Peter mentioned that he thinks Kickstarter should be used to measure interest and ‘kickstart’ the project’s initial batch. It certainly helped that most of the resources (knowledge, people, etc) were already in the company itself.

This talk was one of my favorites as well. Stefanie Posavec is a designer/artist in London. As to where most art is made up of physical materials, her work uses data as the primary ingredient. In her talk, she highlights a couple of projects like the Southbank Centre, a design for the Facebook offices, and Dear Data.

The way Stefanie works amazed me, I never thought about using data in that way. The colorful, simplistic shapes and thought-process behind her work are awesome, especially if you think all those derive from actual data.

One of the projects she talked about is called Dear Data. This was a year-long project where Stefanie and Giorgia Lupi (NY) kept track of different data for 52 weeks. Every week they agreed upon a theme, measured the relevant data for that week and art representing the data on the front of a postcard and the legend explaining it on the back.

They send each other postcards every week of the year. The results of this project are combined in a book. A couple of things they measured are how many times they looked in the mirror, how many times they used their mobile phone and why, but also body contact and the number of compliments or sad thoughts in a week.

I was overall very inspired by the DIBI Conference, aside from really high-quality talks, the day itself was organized very well, the amount and quality of the food were awesome and the coffee great.

I penned down a couple of books which the speakers talked about or mentioned in their talks. Maybe they’ll inspire you too.

Marquet – Turn the Ship Around
A ‘management’ book by an experienced Navy Officer about “A True Story of Turning Followers into Leaders”.

Bayard – How to talk about books you haven’t read yet
In the introduction of each talk, a silly fact was mentioned about the speaker, one of them was that the speaker didn’t actually read the books he talks about in his talks. This book explains how to nail this for your own good.