TNW’s Battle of the Sensors

Every year at The Next Web Conference in Amsterdam, the code-savvy visitors can join the ‘The Next Web Hack Battle’. After a successful hack battle last year, a couple of colleagues and friends decided to attend this year as well. We had a big team of 8 members from all sorts of disciplines.

This year, the hack battle theme was “Battle of the Sensors”. TNW organized it with partners like The Things Network, MessageBird, Mollie, Triggi, Toon, and more! At the beginning of our brainstorm, we thought of several ideas that seemed either too small or were already done previous years (how busy is the toilet…). After a while we came up with the idea to make a smart panic button for elderly people to press when in need.

The idea was to configure a button via The Things Network, which would ultimately send an SMS using the MessageBird API, and execute a phone call to all the numbers configured in the portal.

We decided to use the Django REST Framework for our backend and React for our frontend. Because IBM Bluemix was also a partner, we wanted to use their services to deploy our Docker containers. Unfortunately, we couldn’t get our two Docker containers to communicate with each other. We’ve spent a lot of time discussing this with the IBM support guys but eventually decided to deploy our stack on Heroku for the sake of efficiency. Hopefully, the IBM guys learned something from us as well and will work on their Docker implementation a bit more.

The idea of a smart panic button isn’t revolutionary or original in any way but gave us a good direction in using as many of the provided partners’ services. In the end, we used The Things Network, Triggi, Radix, Bluemix (but failed, so used Heroku), and MessageBird. We also came up with some ideas to implement Mollie to pay and up your MessageBird credits as well as paying for quickly.press as a service. We couldn’t get this working in time because of the time limit. 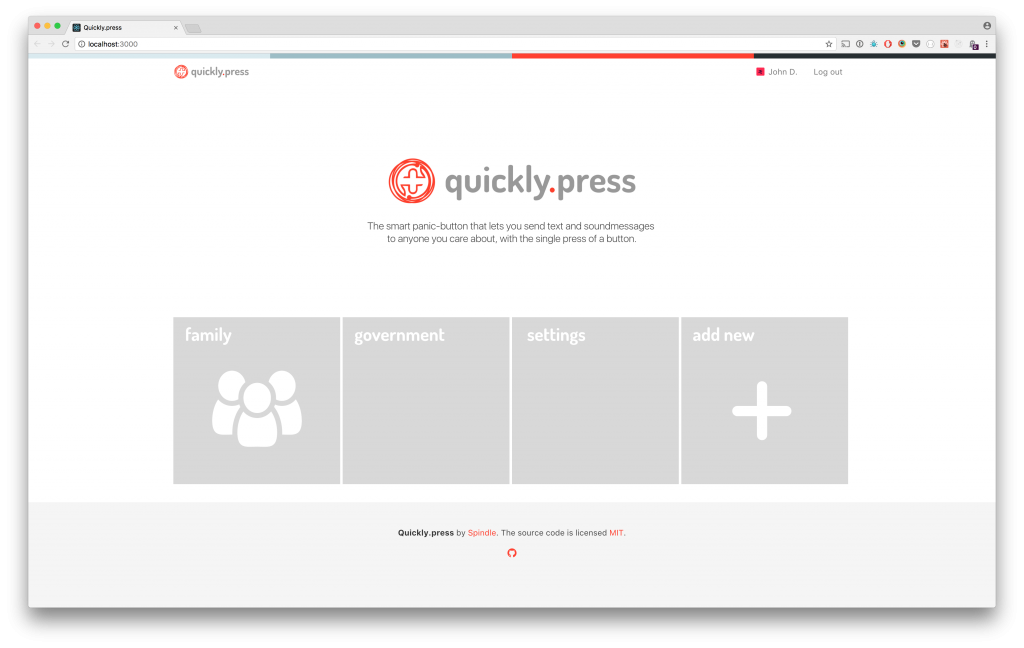 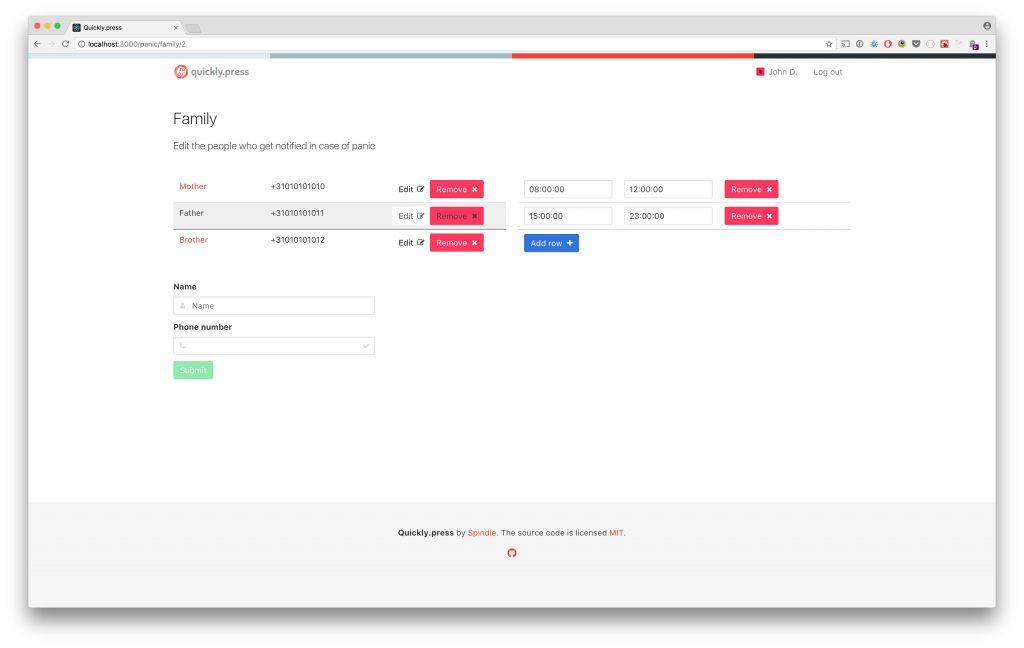 Above you can see the portal, with buttons to configure family data and government data (homecare, government-related agencies), settings (to configure the button, your own name and phone number), and a (non-working) “add new”-button for adding other future services. When you for example click on the family button, you can easily edit or remove family members and their phone numbers, and the times they’re available.

The logo represents a medical cross that connects to dots to each other (the elderly person using the button and the configured phone numbers).

We decided our minimal viable product (MVP) was to have a portal where you could add, edit and delete family members and their phone numbers and add one or multiple time schedules to their number. The hardware for our MVP existed of the button that had a connection to The Things Network, and when pressed executed a call to our API to text and call the family members in our database.

Because one of the partners was Radix (a domain registrar) we could use the TLD ‘.press’ which eventually resulted in our name “quickly.press”.

With a team of very different disciplines, we could simultaneously work on our backend, frontend, design and the hardware itself, which was cool and effective. The hack battle itself lasted for 1.5 days. On the first day, we worked from ~10 AM until 10 PM and got our basic MVP almost working completely. The next day we worked from 9 AM until the deadline at 1 PM. We had a very rough prototype “necklace button” which worked as intended. 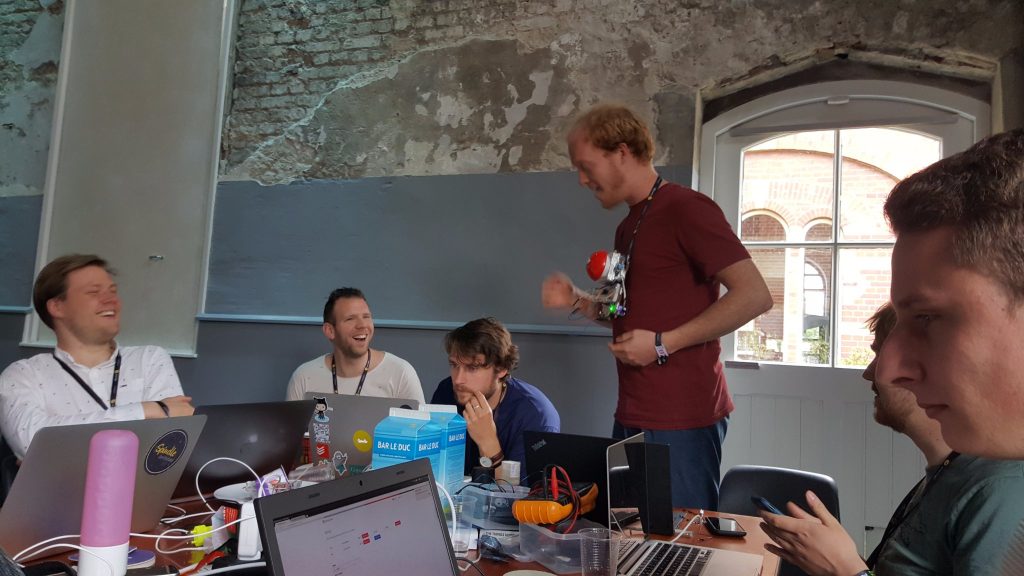 After the deadline, we had to present our idea in a one minute pitch, which unfortunately was very short to both demo and tell what we had achieved in 1.5 days. Still, the idea came across okay and the demo worked successfully. The judging panel was a group of representatives from each of the hack battle partners.

The ideas of our competitors were quite different but also creative, like a Home Alone app, where children could still hear their parents talk to them, a mobile app where you could see the conditions of bars around you (how busy, the temperature, which music they’re playing, etc.), ToonBNB, where AirBNB users can integrate Toon data in their profile, a beer-bike app, where you could use your telephone to locate your bike when you were drunk, and Fifi, an app that lets you check the conditions of your pets ‘cage’ when traveling by plane.

Every partner could name one winning team which would automatically go through to the next round. The next round was a three minutes pitch in the Pitch Tower on the TNW Conference, with a 2000 Euro cash price. We got selected first by Mollie, and third by the MessageBird guys (who offered us a nice platter of smelly cheeses).

The three minutes pitch went a lot better than the one minute pitch because we had a bit more time to explain our idea and the execution of it. We unfortunately didn’t win (the beer-bike guys did) but it was a cool experience nonetheless! 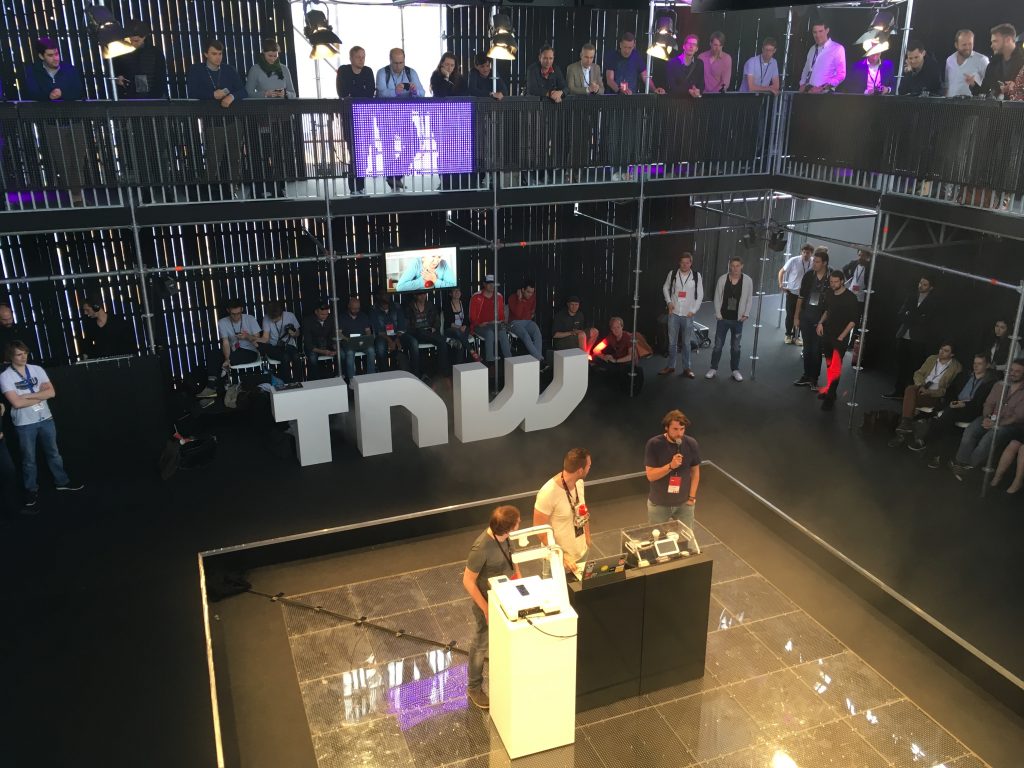 See you next year?

I think the hack battle was well organized and it’s a really good initiative to get people together to work on a project in a short time. There was a lot of nice stuff to drink and eat and the atmosphere was really good. The partners provided enough support and were always available to help out and solve problems. Definitely joining again next year!